Sometimes I find looking for gluten free recipes to be frustrating. A lot of the ones explicitly labelled as gf come with a lot of diet/weight loss/’clean food’ baggage, which I find hard to take. And then I’ll read ‘regular’ recipes with an eye to adaption only to stumble across gluten where there’s no need for it – in soba noodles and tortillas, for instance. Or THEN there’s the recipes where you would think conversion would be simple, but every recipe has five billion flours and heapings of xanthan gum instead of the flour. Nothing against xanthan gum, I just don’t want to use it where it’s not necessary.

All this to say: gnocchi. It’s mostly potato, right? So, I thought, surely a gf recipe wouldn’t be too hard to find! Especially since any time I’ve tried to make gnocchi with gluten flour, they’ve come out tough and gluggy, surely a sign of overworked gluten. So a gf recipe would probably be EASIER! I spent an afternoon wading through recipe after recipe with the above millions of flours and additives. Sorghum gnocchi, anyone? No thanks.

I did eventually find one, from Italy on My Mind. The recipe is here and I won’t reproduce it, but I’ll tell you what I did differently.

The first time I made it I was pushed for time, so instead of boiling the potatoes I did them in the microwave. This worked so well that I’ve done it every time since. They take about ten minutes, although my microwave has an autocook function that does them to perfection. Actually, they take about twenty minutes, because I doubled the recipe. One batch is about right for three adults, or two adults and leftovers. Since we’ve got two adults + one teenager + I want leftovers for lunch the next day, a double batch is about right. Plus, it’s not much more work so why not!

So, a double batch, and I nuked ’em, and since I was pressed for time I also spread them on the tray and then popped it in the freezer. Last time I did one (double) batch of potatoes, put them in the freezer, then decided I would double the batch after all. The twenty minutes the second batch took to cook was about perfect for the first batch to cool down – they actually work up easier if they are still a teeny bit warm.

The first batch I also didn’t read the instructions all the way through. Instead of making a loaf, I rolled them individually by hand. This meant they were flexible enough to make fork dents on, and they look more like ‘proper’ gnocchi, but they were a bit chewy for my taste. The boys loved them, though, and prefer them this way. Too bad, I’m the one cooking them cooking them. So the next time I compromised. I still didn’t do a loaf, instead I rolled squarish snakes and chopped them. 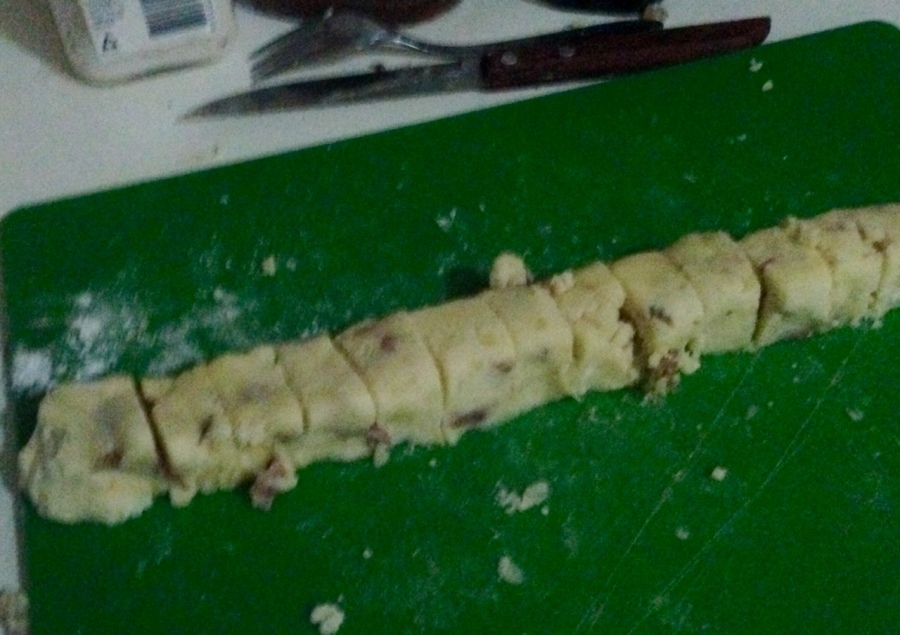 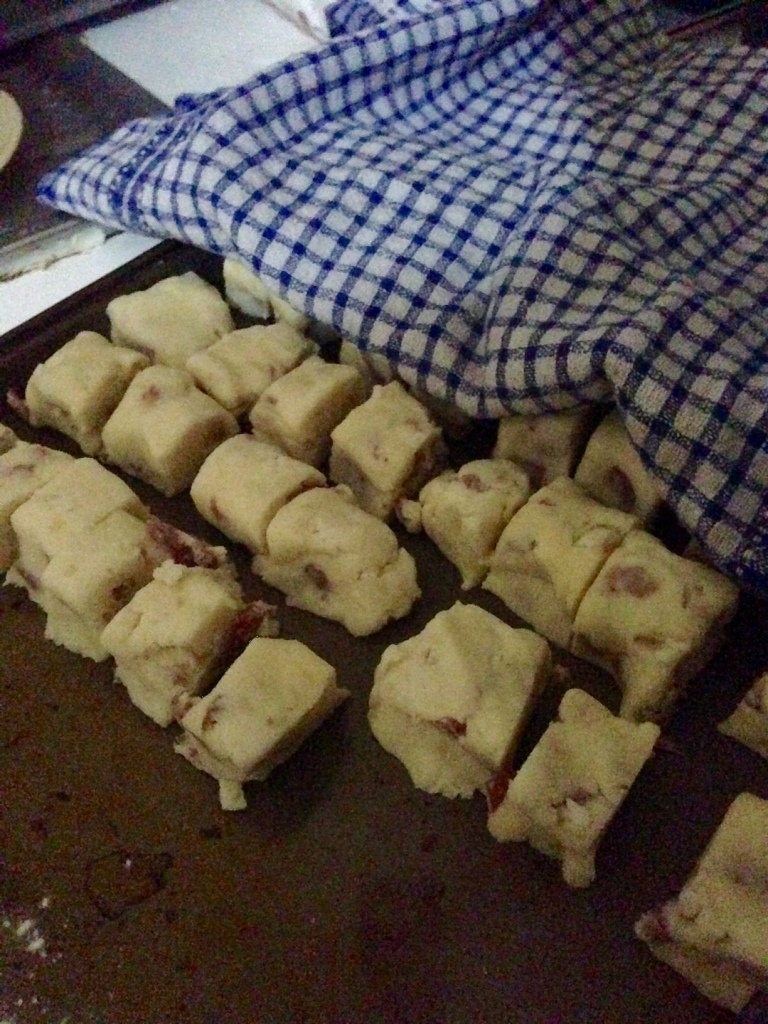 This was much better, I could get a real rhythm going so it was quicker, and the gnocchi came out fluffier and lighter. 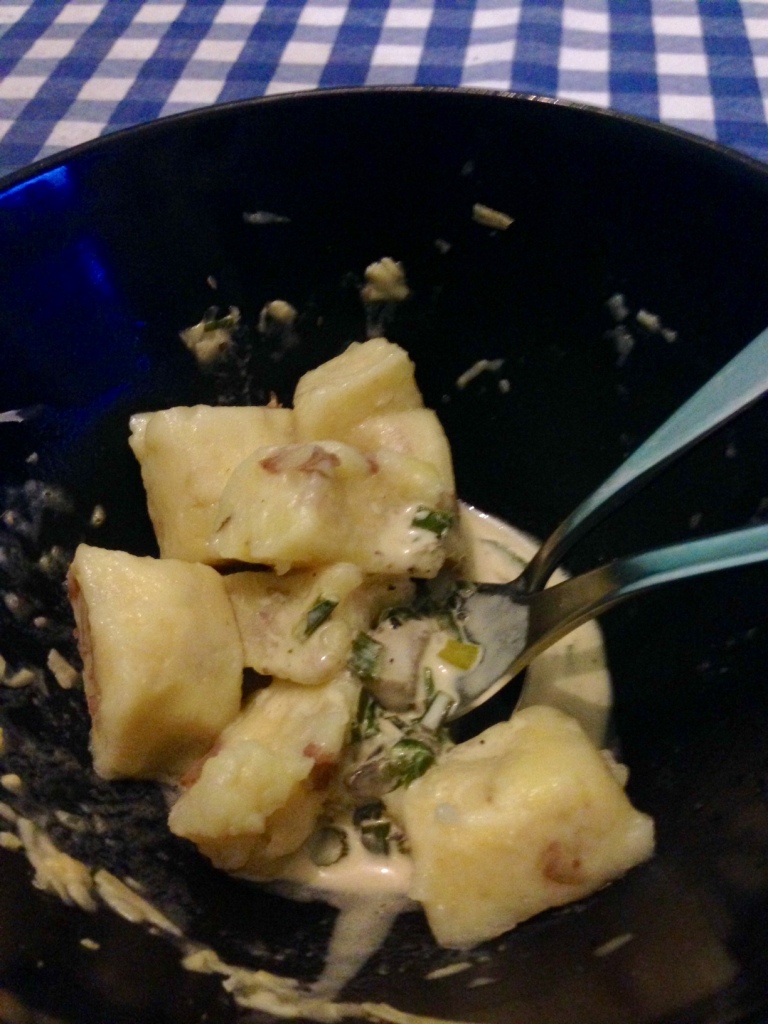 The first time we had them with the sauce from the original recipe (first picture in this post). I forgot to take a photo until my bowl was almost finished. The second time we had them with a sauce of cream, white wine and mushrooms (above). And we just had them again tonight with pesto and cream, and a salad on the side (below, looking… look I am not a food blogger ok. Use your imagination).

Tonight’s batch was made and frozen last time. I wanted to test the freezing process. It worked really well! I just put them in the freezer on a tray when they were made, and the next day I popped them in ziplock bags. Then to cook, I just did them as normal. They take a bit longer but not really even noticeably, and they are a little bit wetter and goopier but not by much. Enough to make the photo less appetising, though. Sorry.

I am very pleased to be able to make up some of a weekend and stock up my freezer – or my best friend’s freezer – with good, simple, delicious food. And the teenager asked if we could have it again, and has requested it twice since. I’d call that a win.

ETA I’m now obsessed that the original blog will be taken down and I’ll loose my recipe, so I’ve put it here mostly for my own reference. Definitely refer to the Paola’s original, the whole blog is lovely. Here’s the link to the original post, again.

Scrub the potatoes and place in a large saucepan, 3/4 filled with cold water. The potatoes should be whole and unpeeled. It is easier if they are a similar size so they all have the same approximate cooking times. Bring to the boil and then simmer until the potatoes are tender (start testing them at 20 – 30 minutes depending on how large they are) when prodded with a fork. Drain (removing one at a time if needed) and peel. Place the cooked potatoes through a potato ricer (or mash them finely) and spread out onto a chopping board. Allow to cool completely. In the meantime make the tomato sauce. Place all the ingredients in a smallish saucepan on medium to low heat and simmer for 30 to 40 minutes, discarding the onion and basil before serving.