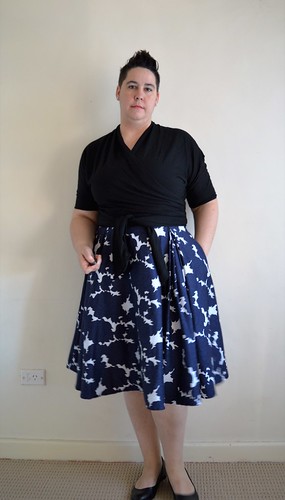 This here is the top part of Butterick 6285, to go with the skirt part I made.

I was initially not particularly interested in this top, as I find wraps tricky on me – they have to be perfect in order to sit right. However when I saw Gertie’s grey version I was intrigued – I think because of the high neckline it sits nicely. A lower wrap just shifts around on me and I always find myself adjusting it. I also liked how it looked tied in back, rather than with the ties creating more visual weight in front. In doing my usual pre-buying google, I found Tasha from By Gum By Golly’s surplice wrap hack and it tipped me over and I picked the pattern up when there was a sale.

I do always like to make a pattern as-is, first, to see how it fits and goes together, before I change anything. The pattern pieces fit on a 1m piece of fabric, but you need four because it’s self lined, meaning it needs just over 2m of fabric. I don’t have that much knit fabric in my stash so for this one I went straight for some of the good stuff – some lightweight merino from the Fabric Store. I originally bought this to make a moneta but it’s so light I don’t think it would do very well for that, so I was happy to use it for this hopefully wearable experiment.

I had quite a bit of a struggle with this one, however. Starting with the very light fabric being hard to cut out. I wrestled with it! However, I got it done and started putting it together. The sewing went very quickly, it’s a neatly drafted pattern. But once I had it together I could see numerous flaws:

First step was to deal with the sleeves. I unpicked them and sewed them with the teeniest seam allowance possible. This helped but I really need more room still. If I make this again I would add 1.5cm to the sleeves. I cut the long sleeves, which should be 3/4ish length but because they are too tight they pull up and are shorter, ending at an awkward spot on my arm. I ended up hemming them 2″ shorter to get them to a point where they weren’t  cutting off my blood flow. Rather than slip stitching I used Gertie’s method here – I also top stitched the tie opening and the waist opening, but that’s getting ahead of myself.

Next was to take the back in. I took a wedge out of the centre back. Here it is after that:

S kindly took a video because I couldn’t see my own back, this is a still from it. Saggy baggy elephant! So I took it in again. And then again, until the back was taken in from dart to dart. Here is what it looks like now:

Those darts are supposed to be pointing straight down, but I’ve angled the back in so much that they’re making a triangle. Totally necessary as without it the back was hugely baggy and looked just shocking. It’s still… not great, probably partly due to all that handling. It might benefit from a wash and a steam block. 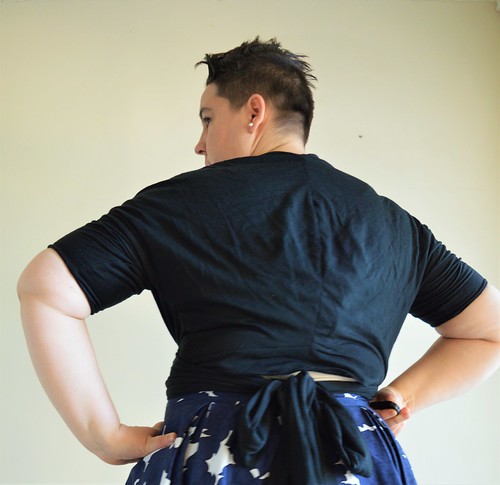 As you can see, I also added a strip along the back. I cut a 2″ strip, sewed it on, and then sewed a sharp angle from the middle of the front to the side seam. I don’t think that made much sense – if I were adjusting it on the flat pattern what this would like is adding 2″ to the side seam and grading sharply up – the front is curved so I essentially evened out that curve – and then lengthening the back 2″ all the way along the pattern piece. The addition isn’t ideal because it doesn’t drape the same way it would if it were one peace but it hopefully makes it wearable – you can see how much it still pulls up, even with the extra length!  I could probably use another inch there right at the centre back.

Honestly I wonder if part of the problem isn’t that it’s too big all round. Someone else mentioned the sizing being quite large in this (I can’t now find where I read that, apologies) – I made the largest size (22) and actually now I’m looking again I really am closer to a size 20. You can see that the neck rumples up with extra fabric around the shoulders – basically it needs a reverse FBA to take that out. But the centre front and back, where I have all the excess, don’t change from size to size. I wonder if I wouldn’t benefit from just taking 1″ or so off the centre line.

I also find the front wrap quite big, and I have to tie it tight and arrange it or it sits loosely. I suspect, however, that it has stretched out some. This might also be user error – I get the feeling my rouching where the front meets the ties is not as deep as it’s meant to be. I cut the ties on the fold because the fabric was being so difficult but suspect I didn’t subtract enough for seam allowance. Therefore where they attach at the front is less gathered. I like that it makes it a bit longer than it might otherwise be, and adds less bulk, but I wonder if it makes that angle of the front less trim and neat.

All up, I’m just not sure about this top. This post sounds so negative but I want to be clear that I really like the pattern – it’s clever, and I actually had a ball sewing it. I think it has a lot of potential despite being a fabric hog. Many of the issues I had were either user error or standard fitting issues I have with most patterns.Although judging by both my experience and the commonalities with other reviews, as drafted the sleeves are too tight it’s too short, and the back is too short specifically.

I am a bit frustrated that I have had to fiddle with it so much and I’m not sure I have worked out what would fix the issues next time. As for the specific make, I don’t know if this version will get much wear. I was feeling ok about it and I do really like it from the front but seeing the back in these photos is making me have serious doubts! I’m not sure I’ll ever feel secure in this, it does take a fair bit of adjusting to sit right and then as I move it pulls and shifts because it’s not quite right. My main criteria for my clothes is that they make me feel put together, and I don’t think this one is going to (hence the name – it’s a full on Monet!) as the back is just… ugh. It’s a real shame because the fabric is so warm and snuggly and the double layer of it is just heavenly. However there’s enough of it in here that perhaps I can salvage it to make something else.

I definitely want to give this pattern another go, whether a wrap version or a surplice hack like Tasha did. I have been thinking about trying a fully reversible one with two different colours of wool fabric.

I did always mean for this to be something of a muslin so I might give it a few outings to try, but be prepared to make my peace with not wearing it. Next time I will: