I’ve been eyeing off Abby Horskin’s designs at Bluegingerdoll for a while now. They keep popping up and every time they do I love them. I think I first saw them on Idle Fancy or maybe Handmade by Heather B. I love the proportions and the lines, and how they are classic and a bit retro while still very wearable in a modern context. I can safely say I’ve loved every make I’ve seen from these patterns, so a while ago I took the plunge and bought a pattern package. I’ve looked at them a lot since then, and took a few to craft camp, but my sewing hasn’t been particularly prolific so nothing got made yet.

Then Abby announced the Get Your Knit On competition, and it gave me a bit of a kick in the rump. I already knew I was going to make a Violet someday, so I bumped it up the list. I still have a pile of finishing to do from craft camp – things needing zips or tweaking, and I probably should be prioritising those. On the other hand, it was very invigorating to sew something quick and simple like a knit dress! 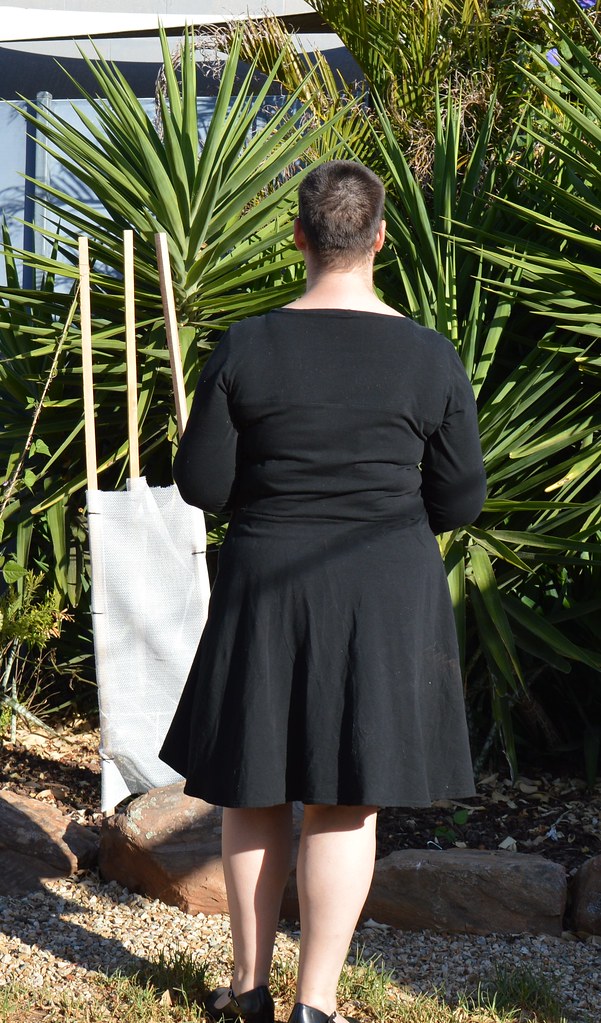 The instructions for this dress are great – very clear, great illustrations, some clever little drafting and construction bits. Even though it’s a reasonably complicated shape with the three piece bodice, it was so simple and easy to sew. I loved about everything about sewing this dress up. I sewed view C, with the long sleeves and the flared skirt. (Which is symmetrical, just so you know, in case you cut it with the wrong bit on the fold and freak out. Not that I would know anything about that. But if I did, it would be fine.) 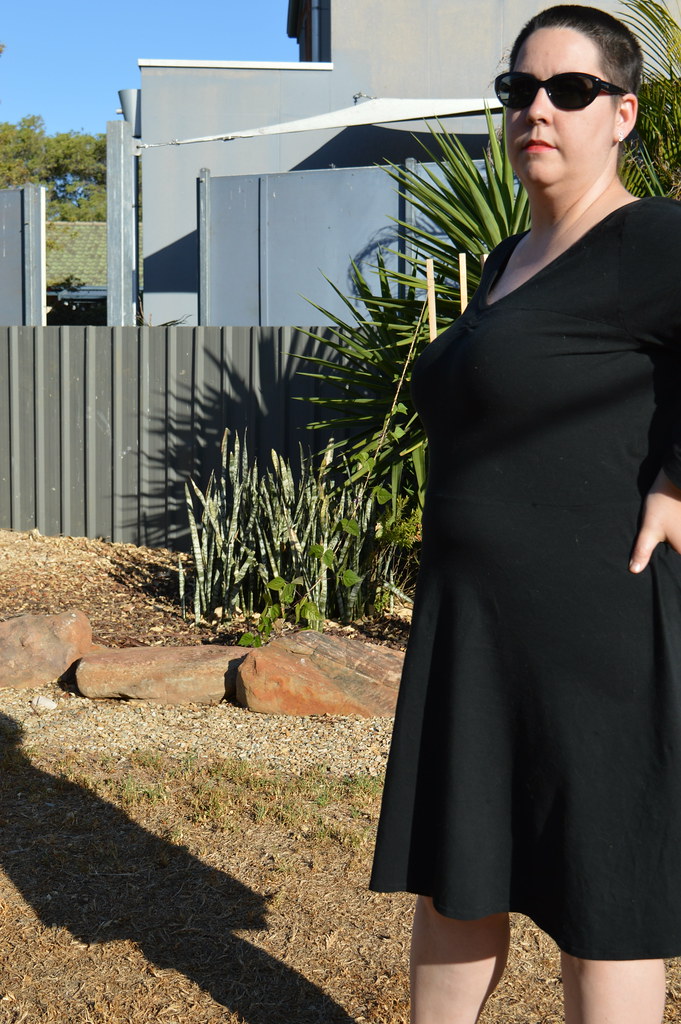 I did make a bunch of adjustments before I even started sewing. Although the patterns are drafted for a D cup, there was still a two size difference between my upper and lower bust. My favourite bra is a DDD, but otherwise I wear an E. But I also have a low-ish bust, and sloping shoulders, which make my upper bust and shoulders proportionately small. I struggled with this with the Lady Skater dress and tops I made, and although I wear them all the time I also am really bothered by the way they sit. It’s an area where I really notice the fit – partly cos it’s close to my face and I see it but also because it makes the shoulder seam sit below my shoulders, and then the sleeves drag down and the neck drags out and I’m always adjusting it and feeling kind of sloppy and ill dressed. 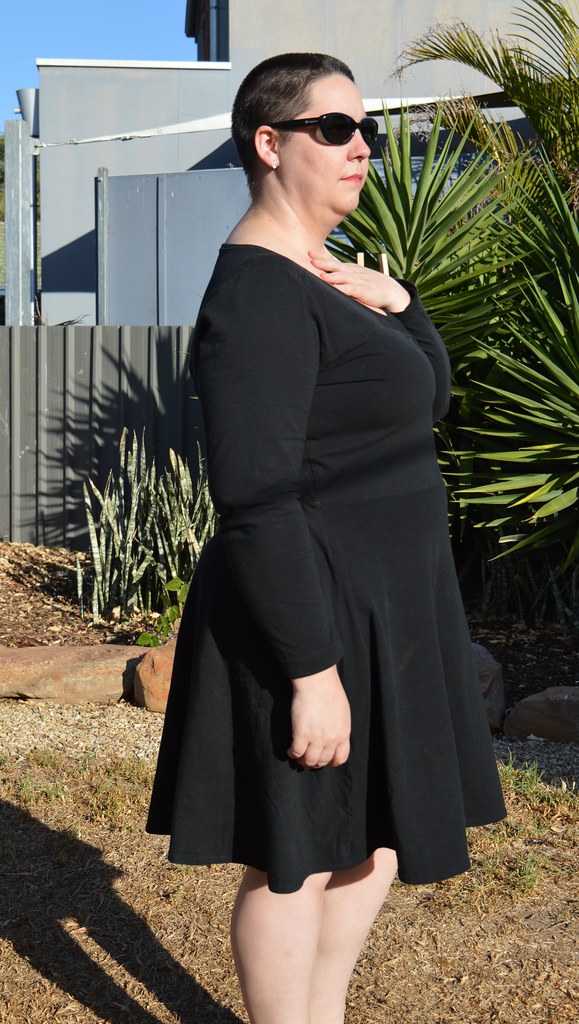 The three-piece construction of the front bodice made this pretty easy to adjust for, actually. I cut a 16 at the top of the middle front yoke, tapering down to a 20 at the underarm, and the same with the corresponding back piece. I cut the skirt and the main front as a 20, and everything else as a 16. Oh except I cut the arms as a size 20 sleeve and a size 16 sleeve cap. As I was making it I was worried it would be too short in the torso, but I did want to make it up mostly from the packet to see how the pattern behaved, because sometimes it’s hard to tell from the flat pattern. Especially in a knit. In the end it worked out really well but I would consider dropping the waist a half inch or so if I made this in something more stable like a ponte – I do have a long waist but the fabric stretched enough that it sits about perfect.

The results were… good. Ish. It was not as… something, as I was thinking it would be. I think a lot of that has to do with the fabric, which is pretty thin and has good recovery in general but because it’s so thin it does sag since the skirt is pretty heavy. I think a more stable fabric would be better for this pattern – for most knit dresses in general, to be honest. Instead of looking like a vintage pinup girl I just look comfy. Which is fine! I like to be comfy and this is a pretty fancy version of comfy, but I would also like to look a bit neater, too, sometimes. So I think I will hunt down some more stable fabric and make this again.

The fabric is some jersey from spottters that I bought ages ago to make bikeshorts out. I have been doing that too, but there was enough left for this dress, and probably another pair of shorts from the scraps. I have no idea what the fabric content is but from memory it has some spandex in it but is mostly cotton. It’s the same material that I used for my lady skaters. Good to be using stash!

Apart from, or maybe also exacerbated by, the fabric, I still had problems with the upper bust/shoulder area. I could tell right away this was going to be a problem, as it was bunching there, but I wanted to see how that would change with wear and as the fabric settled and stretched.

I wore this out for a few hours after I first made it, and it just kept dragging down off of my shoulders. It was really disappointing. I was thinking up all kinds of fixes and future pattern adjustments, but then I realised that the back was really really baggy.

When I pinched out that excess, the shoulders sat beautifully. I got S to pin it for me, traced it in chalk, sewed it up and cut off the excess. Problem solvered! 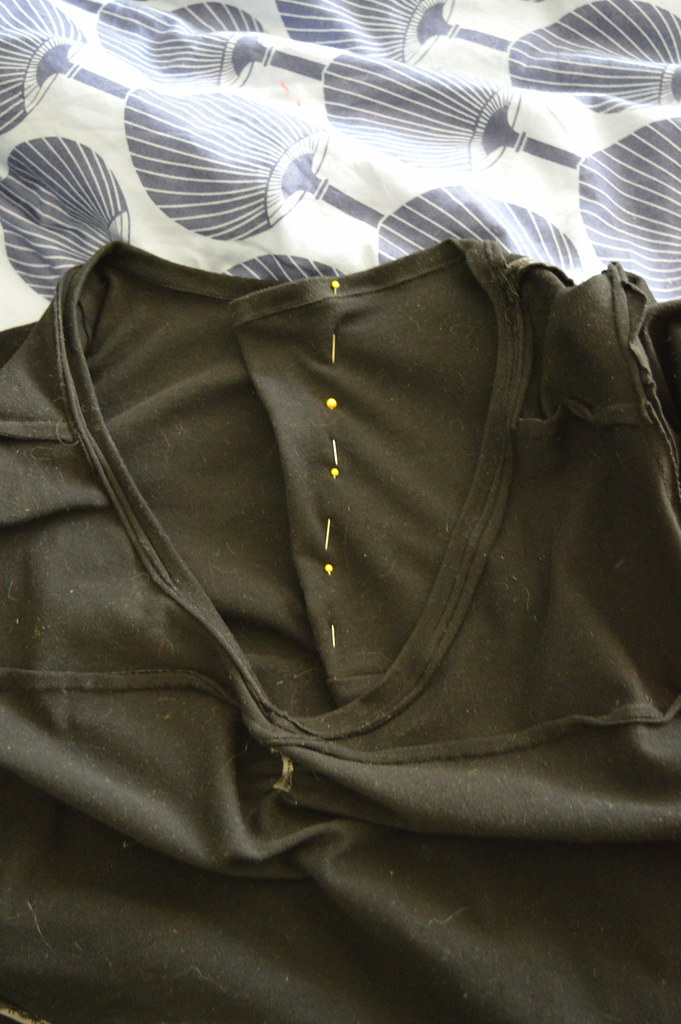 Good place to show you my unfinished seams – I sewed the whole thing on my machine with lightning stitch, and twin needled the hems and the neckline topstitching. And you can also see the elastic stabilising the ruching. I would apologise for the cat hair permanently covering everything, but you know what? It’s not MY fault..

The excess was mostly, conveniently, in the top portion of the back bodice. I cut about 2.5 inches total out of the top, tapering to nothing at the bottom. I kept the cutout bit so I can make the change on the pattern piece (should get on that). I also took regular seam allowance out of the rest of the back, so I probably brought it back down to an 18. And I tapered the sleeves in a bit from the elbow down, too. 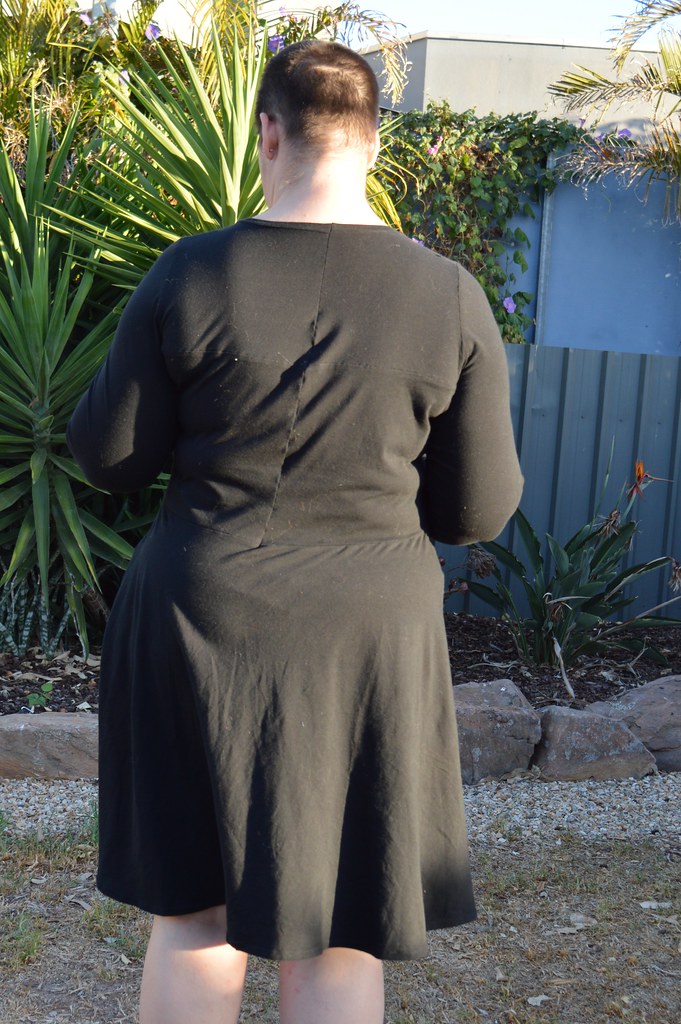 I promise it does not sit as wonky as that, I was trying to capture a twirl here and the light was getting weird so most of the pictures of my fixed version came out funny. So. This will have to do. It does wrinkle a bit, as you can see here. Hazard of adding an impromtu seam where there shouldn’t be one. 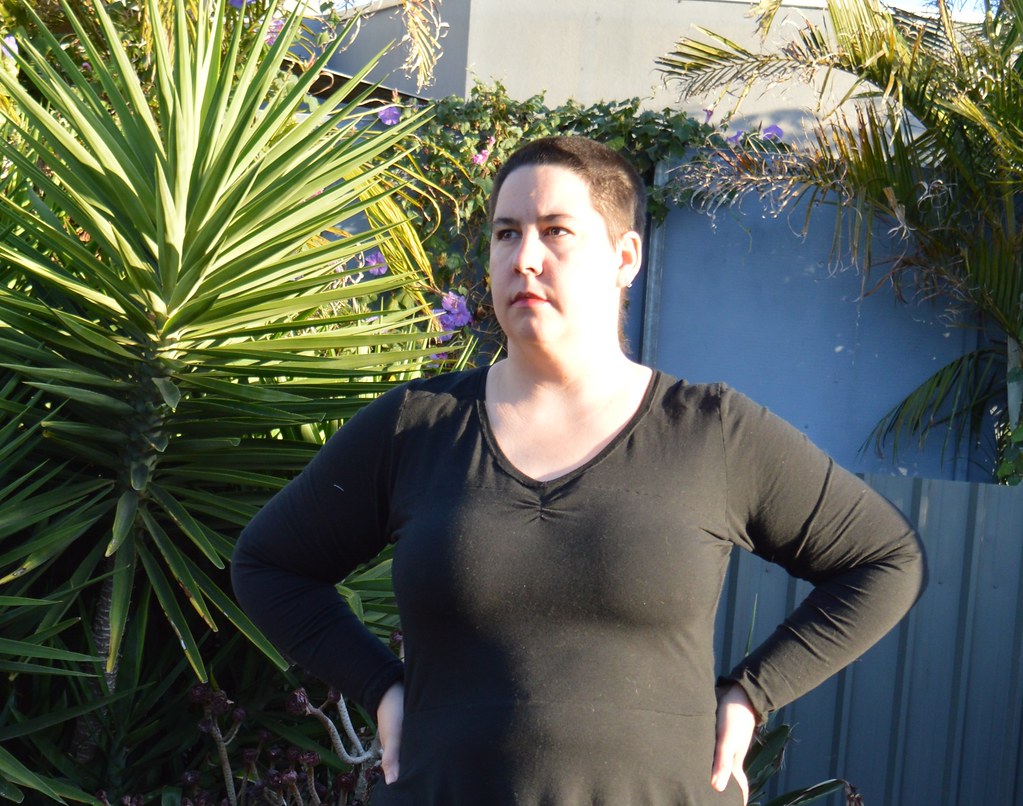 Next time I would consider still taking a little wedge out of the upper bit of the lower front bodice. You can see it pooching a little here – I also didn’t manage to take any good arms-down photos of the fixed dress. Good work, me. Anyway, doing that would basically be making it a proper FBA shape. Conveniently the seam hits me right where I need that change. And I should work out what I need to do for a swayback adjustment, to get rid of the back bunching. 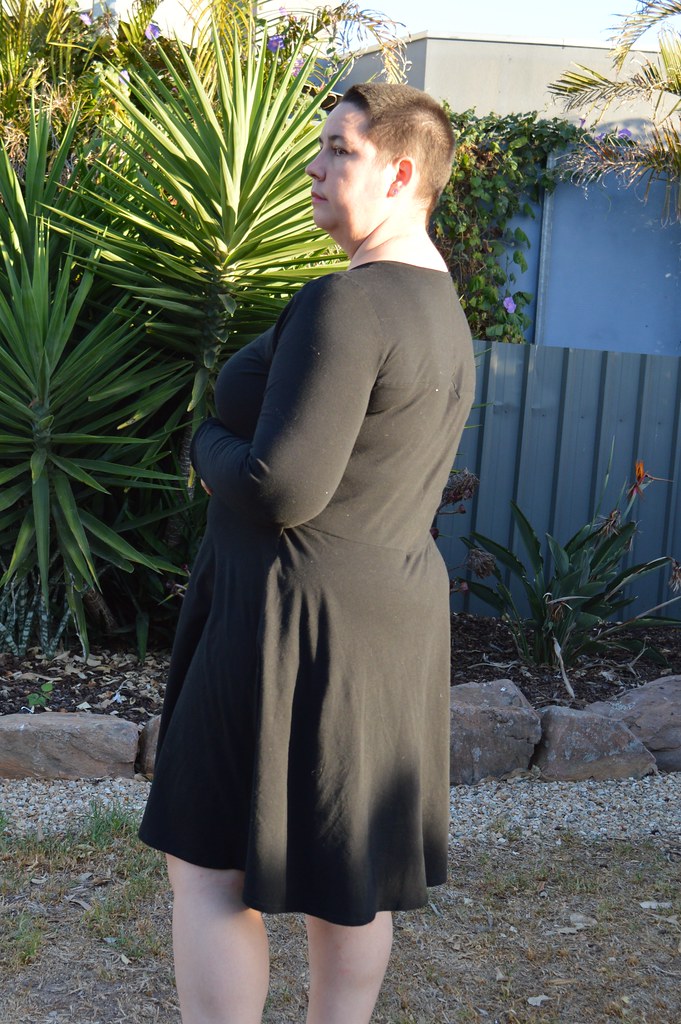 Also I would either staystitch the skirt pieces or else just not cut them out until I was about to sew them – I forgot to cut two pieces because it was getting late by that point, and the one I cut with the rest of the pattern had stretched out a bit by the time I sewed them up.

I also need to re-hem the sleeves because I had to unpick and re-do them after I fixed the shoulders, as they were way too short once the shoulders weren’t dropping low, but my twin needle broke. So they are not as neat as I like.

All up, though, I am very happy. I will wear this dress a lot, even with the limitations of the fabric. It is comfy and I think looks nice. The ruching and v neck and the other little touches of the pattern save it from being just a plain old knit dress. The pattern was an utter delight to sew and makes me really keen to delve into more of Abby’s patterns!